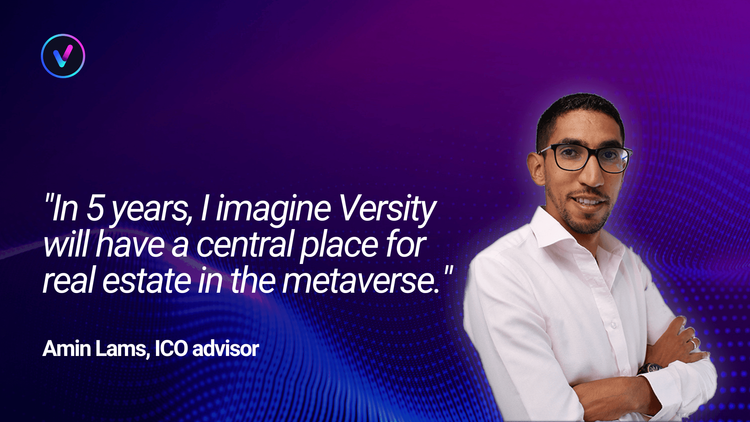 Amin Lams is the founder of TheLams.io and a web entrepreneur since 2011. He has helped hundreds of entrepreneurs launch and create their online business by coaching them on their marketing strategy. He is also an advisor to help drive the deployment of blockchain and web3 projects, and as such has accompanied Versity since the beginning. He tells us more about ICOs.

Can you explain to us what an ICO consists of?

ICO stands for Initial Coin Offering, it is simply a fundraising via cryptocurrencies. ICOs are usually carried out by startup projects that need to raise funds to complete their project. Funds are raised from the general public (individuals or professionals) and in exchange for the funds, investors receive tokens (crypto currencies) issued by the project.

What is the difference between an ICO and a traditional fundraiser?

The main difference is in the nature of the investment. The investor does not receive stocks or shares but receives tokens that are exchangeable on the blockchain for other crypto-currencies. The main advantage for investors is the liquidity of the investment.

If you invest in a startup via a traditional fundraising, you can hardly resell your shares, even if the startup grows.

You have to wait for one of these two conditions to recover your investment and its plue-value (or minus-value):
- IPO
- Buyout by another company

On an ICO, the investor has his tokens quickly and can exchange them on centralized (Binance, Kucoin, Coinbase, etc) or decentralized (Uniswap, Pancakeswap, etc) marketplaces...

The advantage for the project is twofold. Firstly it is simpler to implement than a traditional fundraising. Secondly, the ICO allows the project to create a community of users that can often include several tens of thousands of people.

What role do you play in supporting companies that launch ICOs?

With TheLams.io, we support 360° projects on many aspects. We work with founders from the birth of the idea to the issuance of tokens. Our experience allows us to have a relevant look at cross-cutting topics such as tokenomics, roadmap, fundraising structuring and of course marketing strategies.

Our experience as investors also allows us to take into account the expectations of the public and make the project attractive to the community because sometimes project holders focus on the company's goals and do not take into account what investors want.

Our goal is to help the project build the best project with the best possible results both for the project holders but also for the investors.

Do you have criteria for choosing which projects to participate in?

The criteria are many.  Over time, you develop a little intuition... But the main point is to look at who is behind the project. The team is paramount!

Who are the different members? What is their experience and have they already succeeded in Web2 or Web3 projects?

Sometimes, there are projects that contact us with a great idea, a great plan and a big vision... But the project owner is alone. And that's a sticking point for us.

Then, what is the intention of the project? Is the project there to build something for the long term or do the founders just want to ride a trend to make a good move and give up on the next bear market? Vision is very important.

These three elements allow us to make a first filter and even if we can never predict the future, these few questions allow us to avoid a large part of the projects doomed to failure.

In your opinion, in what areas will blockchain be mostly used in 5 years?

Today, it's quite complex to imagine the future of blockchain uses because it's still very young and there are still many things to be created.

If I were to predict something, I would talk about this gaming + play-to-earn + metavers combination. Even though there are differences in these sectors, I think the next major blockchain players will emerge from this world, which is why personally this is where I invest the most.

Why did you join Versity as an advisor?

For the points I mentioned above. The team and the vision of the project. A lot of crypto projects are launched by people "out of nowhere" with little or no experience in the world of startups and building successful businesses.

This is different.  Les Agences de Papa is a company that is already publicly traded, has already successfully raised several million euros and with over 100 employees. It's a team that has already demonstrated that they know how to execute an idea. Because an idea is not worth much, it is the implementation of this idea that makes the success or not of the project.  This is the main point that made me want to join Versity as an advisor.

Where do you see Versity in 5 years?

The Versity team demonstrated with Les Agences de Papa that they are capable of attacking a competitive market and taking an important place. This experience will serve them well in becoming a major real estate player in the metaverse.

Today, we are working hard to set this up in France initially. In 5 years, I imagine Versity will be a central place in Europe and in the world for real estate in the metaverse. I wish the whole team that Versity become a must for all real estate transactions.

Eager to discover more about our team of advisors?
Discover the interview with Émilien Ercolani, blockchain specialist!